The greatest 'pregame' card game ever

Begin with 2-5 Players.
Deal 3 cards face down each player.

Place one card facing up on top of down cards.

Deal out hand of 4 cards to each player.
Remaining cards are draw pile.
Players may swap out top cards from hand.
The bottom cards CANNOT be looked at or changed.

TO BEGIN:
Player with splode (or lowest card) goes first.
Place card face up in middle of table.
Next player must match or beat the card showing.
NOTE: You may play multiples of a card (ie: 2 Hipster foxes).
Once you play, draw from the draw pile.
You must have at min. 4 cards in hand, until the draw pile runs out.
If a player cannot Play they must pick up the face-up pile.

OTHER GAME RULES:
Four of one type in a row, 'kills the pile' + player plays again.
4 white cards do not kill (unless an oni).
A Kid Fetus may be included in the four of a type.
When down to your last 6 cards:
You play only your (top) first, and then the bottom cards are played last.
They are BLIND plays.
You may not look at them.
Choose wisely.
The first player to get rid of all their cards WINS!
Optional: Keep Playing for 2nD, 3rd place etc.

SPECIAL CARDS:
LITTLE FUSS RESETS THE VALUE OF THE FACE-UP PILE TO 1.KID FETUS SKIPS OR PASSES LAST VALUE ON THE PILE TO THE NEXT PLAYERONI KILLS THE PILE AND PLAYER PLAYS AGAIN (ANY CARD).THE “F-U” CARDS FORCES THE NEXT PLAYER TO PICK UP PILE. 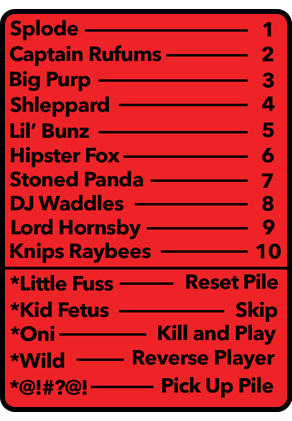 EACH CHARACTER HAS A UNIQUE STORY
CLICK TO LEARN MORE!

Donnie Bucksley: Proud homeowner, has been referred to by some as the “Professor X” of S Pancakes. Unashamed fan of talk show host Sally Jesse Raphael, but will also tolerate Maury Povich, especially the paternity test episodes. Mr. Bucksley claims he has stopped participating since his stroke at a Black Angus followed by a pulled hammy after a sprint workout. He loves the Wu Tang name generator and has the name, Arrogant Desperado. Wears the Sally Jesse red glasses because he tends to freeze up when you shine a light in his eyes.

Rumored to have been spawned in horsey sauce and asbestos in an Akron, Ohio Arby’s. After a rough time in high school, tried to be the 'cool RA' in college, but got walked all over. Splode has been known to tweet out seemingly random statements to get attention, but the tweets are so obscure nobody likes or retweets them, only fueling his despair. Enjoys Nickelback, and recently tried being vegan and doing Crossfit and told everyone about it, because he thought it would make him cool.

Formerly a Dukakis supporter and Malibu resident, now captains a small ship in the Pacific Northwest, which was recently christened, Kanye Wet after learning that Wet Dream was not original at all. Does charters 4 times a week for corporate booze cruises, and day trades when not sailing. Has a tendency to drink grain alcohol and his homemade Kombucha while watching Jeopardy because he has a man crush on Alex Trebek citing, "he is just so good with small talk."

A demigod amongst men, Big Purp offers 'how to meet women' seminars to millions all over the world titled, “Will you go to Prom with me?” Bitter after dreams of being an NBA star were crushed early, he blames his high school coach and other ‘haters’ for judging him and denying his chance to get on his hungry student athlete grind, go D1 and eventually play game 7 in the NBA Finals. His bariatric surgery helped him get his life back on track. He still plays in rec leagues & is a ball hog.

Joop! cologne wearer, Chelsea fan, and an expat from Scotland after a shameful attempt to get Scotland independent in the early 90’s...was later a dismissed juror in the OJ Simpson trial. Can identify any scotch with only a whiff. Shleppard has had to move several times because he walks so heavy in his flat that his neighbors can't stand it. Shlepperd runs a non-profit aimed at turning sheep dogs into drug dogs and his dream is to get Chuck Woolery to do a telethon.

Previously a puff pastry chef, Bunz quit and sued over offensive remarks from colleagues around Easter time so the story goes. Lil’ Bunz has reinvented himself as a prominent investment banker but is still in debt from a sports car purchasing binge. Swears by Lasik and has a Dippin Dots addiction. Lil Bunz will steal your girl as he usually attracts all kinds of women adoring how cute he his. Snapchats most of his workouts shirtless with geotags and lets you know he worked out that day.

Incredibly above-average and a graduate of Bard College with a degree in Liberal Arts. A chain-smoker of unfiltered American Spirits, and is fully trust-funded. A Coachella regular, Hipster Fox manages social media accounts for an Urban Outfitters knock-off store, and also does freelance graphic design on Upwork. Claims to have been the first to listen to Serial, the podcast and blogs about IPA’s and craft coffee. Has a tendency to get a little too political on Facebook.

Still resenting the fact his real parents loaned him out and refers to them as oppressive Tiger Parents, Stoned Panda copes with smokeable bamboo & the occasional vape. He finds himself unmotivated most days, but still proudly uses the hashtag: #teambake. He deals on the side but prefers to be known for his outdoorsy photography.

Became a DJ after learning that rapper Positive K did both the male and female parts in the song “I Gotta Man.” The first CD single he bought. Waddles was an all-American high school and college swimmer and is an expert on all things Janet Evans, Nancy Kerrigan, and Monica Seles. When not performing sets, 'dicking' around making beats, or driving for Uber, likes to watch Law & Order SVU and hopes to own a SoulCycle franchise soon.

Quintessential OK Boomer and Psoriasis sufferer. Owns a flip phone user, actually owns land in the UK after selling a bunch of municipal bonds in the 80’s. His grandfather helped draft the Sykes-Picot agreement. Although sometimes bullied for his monacle, he claims it helps him overcome his lazy eye and to better inspect diamonds in his wholesale diamond business, which is allegedly a front for something else. Also a great Ebayer. A+

Makes it clear, he is only “pre-rabies” and is on heavy medication to fight it. This disease and subsequent medication led him to a lucrative North American drug operation. Admires Pablo Escobar, reads Dickens, Dostoevsky and Sue Grafton novels. Recently made a drone purchase and pretty much gets whatever he wants. Refers to espresso as 'expresso' and pronounces frustrated as 'fustrated.' SMH

Not much is known except that Little Fuss remains incognito with a mask, still uses the AOL 10,000 free hours CD-Roms, but has been rumored to be in IT support after learning most things just require a reboot.

The classified Soviet human clone project proposed by Gorbahcev pre-glasnost, ultimately failed. Gorbachev’s birthmark and confessed guilty pleasure, The Flintstones are remnants of his project. Kid Fetus visits little children all over the world in their sleep to talk about the pro’s and con’s of Communism but is only able to repeat what has been said.

The Sigma Chi frat-star has transferred to at least 7 different universities in the last 5 years, citing “that they don’t have my major” as reasons. While friends joke about Tourettes, the fact is no dirty word is off limits. This bro will talk a big game about being a homie and having your back, but without fail you end up with all the crap--yet you keep him around because he is just so frat. Favorite movie is Road House and Barstool videos.

The tears of this little girl are not because her parents are forcing the Clarinet on her, but are all the ‘goals’ and ‘extra’ she wanted so badly that avoided her and applied only to her friends. She constantly refers to fake friends in social media, but ironically she is one. Her Tumblr is actually pretty lit and wants to make a bikini line so she can post pictures of herself without guilt. She also went viral on Tik-Tok with her made up dance called "The Glint."

Oni is a Japanese prototype robot accidently shipped in a container of Subaru Imprezas, but now resides in Phoenix, Arizona (the dry heat prevents rust). Terminator 2 was the greatest movie ever made, Robocop second and still watches both weekly on laser disc. Performs really well at Trivia Nites at local bars, but has been banned from many due to anger problems and also kills conversations because he loves to talk about himself.